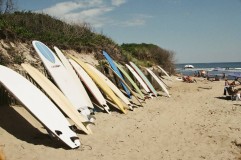 After the winter that wouldn’t end, we’re ready. Even though spring was late, the tourists showed up even earlier! No surprise, given the popularity of The Affair. (The Firehouse and Ditch Plains sure do look different. Then again we almost don’t recognize Ditch anymore – with all the modern and traditional McMansions changing the foot print of our favorite beach.) As always, there’s something new around every corner in 11954.

EAT, DRINK AND BE MTK:

(sister restaurants in Sag Harbor and NYC is moving in. O’Murphy’s has moved up to the Docks where Mannucci’s was, so you can still get a Guinness and the best onion rings around. Jon Krasner is opening a burgers & tequila joint called Saltbox where O’Murph’s was (99 Edgemere). And yes, the rumors are true… the WONG (Shagwong for those of you who aren’t of the 11954 persuasion) has finally been sold to a new owner who plans to improve the kitchen, but thankfully keep the sign and the fabulous Peter Beard images. (Our toes are crossed about this, we’ve heard the “no big changes” tune before. Hello, East Deck!)

Duryea’s new owner was about to submit plans to tear down the Duryea’s cottage and the iconic white icehouse and put up a parking lot. Literally.  But it looks like the plans are being revised. We hope they’ll restore the existing buildings. Time will tell. 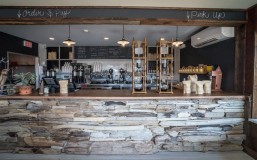 East By Northeast has a new executive chef, Jeremy Blutstein, whose Fluke Crudo and Block Island Swordfish are winning raves, not to mention the epic sushi, an outdoor patio, and live music Tuesdays, Fridays and Saturdays. Yannis Pappagiani from the Beach House has opened Left Hand Artisan Coffee Brewers, where CoffeeTauk used to be.

Everyone and their brother, sister, kids and grandkids wants to get married out here. Exquisite Food, a high-end catering company, will donate 5% of the cost of any wedding they plan or cater to the charity of the couple’s choice.

MTK SURF SHOP has moved into the space where Ronnie’s deli was, on Main Street. Sharkbites, a groovy new gift shop where Willow used to be, will also be selling clothes for boys and girls age 7-12 and some frocks for the ladies, made by owner Peri Allen. Shine, a boutique for

women, is going into the space Share With had on Main Street. Don’t worry, Share With is still open a few doors down. Watch out for Fin’s pop up store (we can’t say where yet!) They’ve expanded their gold plated megaladon shark tooth jewelry collection to include silver, earrings and more. You can find Fin at Share With and the Poolside collective @Beachhouse, a new boutique in town.

Buddhaberry has new organic dairy-free options and an expanded gift selection with candy-themed pajamas and pillows. The MTK Movie has played it’s last reel, but if you want a “real” expensive spin class uber popular Soul Cycle has moved in.

Paddlers for Humanity, a local charity that organizes paddling events to raise money for children around the world and local families in crisis, is celebrating their 10th anniversary with a commemorative Montauk to Block Island Paddle, Saturday August 29th.  Sign up for the 18-mile paddle and please sponsor someone taking the challenge.  CCOM (Concerned Citizens of Montauk, AKA Preserve Montauk) will take you hiking, birding, cleans the beaches and protects the water. Show them some love! Our Playhouse is still raising money to build an Aquatic Center and a Community Center that can host cultural events, concerts, and more. We did a new logo and tag line for them… if you really love MTK – don’t just buy the tee shirt – get involved.

We hope you have a great summer. See you at the beach. If you get a parking space!